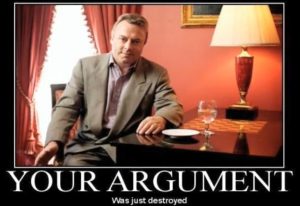 One of the favorite atheist rebuttals” during arguments concerning the resurrection of Jesus Christ from the dead,and  among other issues of historicity confirming Christian record, is the flippant statement that “extraordinary claims require extraordinary evidence.” This is generally followed by a triumphant look on the part of the atheist, who is quite positive that his or her extensive reading of the Wiki-Quotes of Christopher Hitchens handily trump any examination of historiography or philosophical consistency.”

But let’s take a closer look at that statement. Does the statement extraordinary claims require extraordinary evidence” actually hold true, or for that matter, really mean anything?

That statement can be broken up into three sections, which should be examined individually before examined in conjunction with each other:

EG. “Buddhist and Hindu belief systems formed in India and Tibet teach that the body is governed by many chakras, or energy centres. There are seven major chakras: six are aligned in an ascending column from the base of the spine to the tip of the head and one hovers outside the body, between the genitals and the knees.“

To people who have grown up in Western culture, this would be a more extraordinary claim. People living in India might not find it so extraordinary. This makes the concepts of extraordinary completely subjective. How can an objective value be placed upon a word such as extraordinary? The idea that certain claims, such as the resurrection of Jesus or biblical miracles in general are extraordinary, is completely the subjective opinion of the person stating this. We could point out that for over a millenia it would be the atheist’s denial of Jesus’ life as described in the Gospels which would be an extraordinary claim. This irony just goes to further prove the point that calling a claim extraordinary, while a clever rhetorical device, is essentially meaningless.

Before examining the second point, let’s briefly unpackage the third while we’re discussing the concept of extraordinary claims.

In order to really see what the questioner is demanding here, both words must be examined. We`ve looked at extraordinary, and determined that it is both subjective and ambiguous. So what of “evidence?”

“There is something which speaks within us in the language of eternity, not merely in the language of transitoriness. The consciousness of the transitoriness of things is an indication of the presence of a non-transitory eternity. This is a subtle voice that speaks within us, but it gets stifled, smothered by the mud that is thrown over it and the dust that is kicked up by the activity of the senses which blinds our eyes until we cannot see what is hidden behind this profundity within our own selves.”http://www.swami-krishnananda.org/epist/epistemology_06.html

The Yogi believes that “senses… blind our eyes until we cannot see what is hidden behind this profundity within our own selves,” whereas a scientist uses the senses to find evidence. The scientist will go through the rigours of the scientific method to find evidence and the Yogi will go through the rigors of meditation to find the “profundity within our own selves.”

Thus, even the word “evidence” itself must be clarified if it is to be deemed objective instead of subjective. The person who is making the claim must be able to demonstrate what they call evidence is actually valid evidence. A search of human philosophy will demonstrate that this is harder to do then what most people first think.[1]

The final word in this sentence is “requires.”

Even if one could show that “extraordinary claims” and “extraordinary evidence” are indeed objective, which looks extremely unlikely, it is hard to see why one “requires” them to correlate to each other. What if a claim is indeed true, but there is little evidence for it? Under this approach the person would fall into error because of this completely unproven approach. He would deny the claim because of this word. At one time there was little evidence that the earth was round, so the scientific community thought the earth was flat. There was plenty of evidence for that, just look at the ocean. It looks flat. There doesn’t seem to be a necessary connection between an Extraordinary Claim and Extraordinary Evidence. Rather, it appears that this approach could lead one into error.

This entire article might seem to some a flippant response to a reasonable demand. But is the demand reasonable? From a philosophical perspective, the recent tomes being churned out by the self-labelled “Four Horsemen of the Apocalypse” are exceptionally shallow books. Do they ask good questions? Yes. Do they bring up some good points? Absolutely. Are they in any way philosophically consistent to the point that their thesis of anti-theism can be accepted? Absolutely not. And thus, the rhetorical devices of the anti-theist crowd must be held to the same high standards they disingenuously claim to hold religion to.

The stark reality is that the witty statement “extraordinary claims demand extraordinary evidence” is one that in every sense that matters is semantically meaningless. It is actually an attempt to demand the evidence that the asker would require to believe in something without explaining why that is necessary. When the polemical anti-God, anti-Christian rhetoric of someone like Christopher Hitchens is examined, it becomes quite clear that no matter what evidence is presented, he never would have decided to believe in God’s existence because the idea itself was reprehensible to him.

And thus, this statement should be abandoned as a rhetorical device, rather then a valid argument, due to its lack of meaning and philosophical function.

There is probably no more sought after title among writers, activists and idealistic university students than that of “contrarian”—the martyr-like defender of a righteous cause. Many even attempt to become contrarians by wittily opposing the mainstream as much as possible, in spite of the fact that it is becoming increasingly difficult to appear the martyr by opposing global warming. I find the desire to be a contrarian to be extremely self contradictory—if a contrarian is indeed one who defends a righteous cause, than while the contrarian may in fact be a voice crying in the wilderness, he should not enjoy being so. Instead, a contrarian by definition should long for his views—if indeed he actually believes them to be true—to be main stream.

And what true contrarians are left in today’s washed-out culture? It often seems as if the era of youthful rage against injustice is over, simply because the great causes of today are more or less agreed upon. Environmentalism is trendy, even to some extent among conservatives. No one is advocating for any sort of racist apartheid or devaluing of any ethnic group. Every one pretty much agrees (albeit with much apathy) that the genocides in Darfur, Congo and elsewhere are horrific and should be put to an end (just not by us.) For the most part, what passes for controversy today are manufactured tempests in teacups, with greedy journalists eagerly waiting for someone, anyone to say anything that resembles racism, or sexism, or some other “ism.”

Ironically, I think that the last real contrarians are the Christians.

Christians do not want to be contrarians. They want to be main stream, simply because Christianity is a religion that makes universalist claims. If Christians actually do believe their own faith, they must believe that the entire world would be better off following biblical truth. Of course, much of this truth is quite uncomfortable to today’s culture of instant gratification and moral relativism.

We believe abortion, based on embryology, biology, and moral philosophy is the wilful destruction of a human life that we have no right to take.

We believe that gay marriage should not be permitted, based on both religious truth and the societal implications that reflect that truth.

We believe that promiscuity is not only immoral, but damaging to society.

We believe that Christianity is the only true faith.

These views, while once prevalent, are not very popular now, although I would argue that all but the last of these statements is self-evident. If you challenge our culture on abortion, you get called “anti-choice,” or “misogynist,” or some other creative slur. If you challenge the idea that gay marriage is a valid concept, you get compared to George Wallace or some equally distasteful racist. And if you point out the ill effects of promiscuity, you get called a prude, or sexually repressed, or worse.

Yet, Christians do not wallow in the idea that we are “contrarians,” hugging this epithet to ourselves as a badge of honour. Because, as any genuine contrarian, we would prefer that others would recognize the truth in what we say and change their minds. We genuinely believe that if people would comport themselves in a Christian fashion, society would be better off.

Now, I realize that it may be hard to believe that country that lacked a sky-rocketing STD rate, plunging demographics, and broken homes could be better. But we actually believe it.

Even if everyone else thinks something to the contrary.