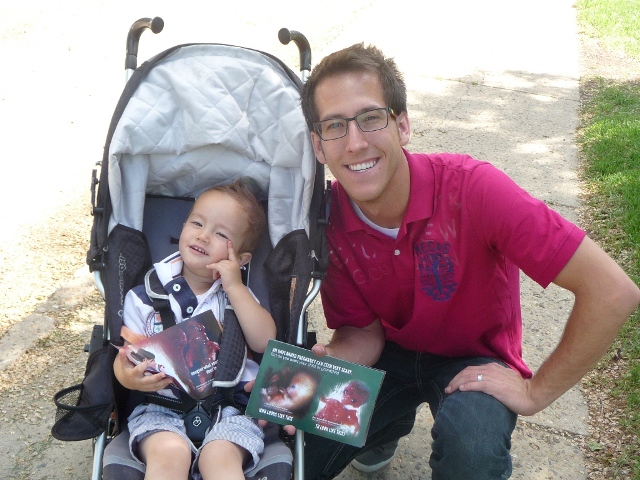 “Why would you give up so much for pro-life work?”

Over the past few months this question has been asked repeatedly by friends and family alike. Most ask out of curiosity, some in admiration and wonderment, and a few in tones of ridicule and spite when they learn of my new employment with the Canadian Centre for Bio-Ethical Reform. For myself, I have always kept a motto of keeping all my options open. Throughout high school, for example, I took all academic courses since I wasn’t sure of my career path, and even during the first two years of university I tried introduction courses from every faculty available. Once my profession was chosen, the most enticing aspect of becoming a Chartered Accountant (CA) was the endless possibilities it would bring. However, never had I imagined that of all the options available, that this would be God’s way for me.

This past summer, as I studied for my final test to complete and obtain my CA designation, it was impossible not to think about my future career and how to use my capacities to God’s honour and glory. In the parable of the talents, as told in Matthew 25, it clearly shows us that the Lord has given talents to everyone and asks of us that we use and multiply these talents to the good of the Kingdom of Heaven. Further in this parable it can be seen that unto those who the Lord has given much, much is also required of them. Since the servant in the parable that received five talents, an additional five talents were required of him.

But this return of talents is not simply turning five dollars into ten dollars and perhaps even reserving a portion for tithes and the poor—no, this return is much greater. Matthew 25:14 speaks of the man who “delivered unto [his servants] his goods.” Symbolizing God’s gifts to us, this speaks of capacities of His image that are endowed unto all people: capacities of knowledge, love, and ability. Too often, we think of using our time and talents as our duty, which it undoubtedly is, but the higher goal must be to expand God’s Kingdom and return what we received with thankfulness and interest. That can be very practical. If you help someone with car troubles on the side of the road the greatest reward is not that this person gives you a million dollars for your act of kindness, nor that it may cause he or she to return the favour to someone else down the road, but rather that you did it to serve the Master, and that the person may even ponder upon something so foreign to our fallen world.

Now, as a CA, I could look forward to and climb the corporate ladder in front of me, dreaming of a nice house, a fancy car, a boat perhaps and many sunny vacations, or I could consider an offer to help manage a non-profit organization that advocates for the most vulnerable of our neighbours. For over eight years already, the Lord has made the plight of the pre-born an important part of my life and now I have the opportunity to use my talents as an accountant to the good of those very children.

This is not to say it was an easy step for me to take, especially as the head of our little family and having the responsibility of looking after and providing for them. It took time, counsel, prayer and much encouragement from Above to show me that I place too much faith in a regular paycheque that is received from your employer. Since October my wife and I have been fundraising for our salary and in this time I have realized it must all come from the Lord, no matter that your occupation is. The fact that your employer doesn’t go bankrupt, that business continues to thrive, that you have the health and ability to work, that your labour is blessed—all these factors and many more come from the Lord alone.

In Matthew 6 we read, “Lay not up for yourselves treasures upon earth, where moth and rust doth corrupt, and where thieves break through and steal: but lay up for yourselves treasures in heaven, where neither moth nor rust doth corrupt, and where thieves do not break through nor steal: for where your treasure is, there will your heart be also.” In his book, The Cost of Discipleship, Dietrich Bonhoeffer explains, “[Man] imagines that there is a relation of cause and effect between work and sustenance, but Jesus explodes that illusion. According to Him, bread is not to be valued as the reward for our work; He speaks instead of the carefree simplicity of the man who walks with Him and accepts everything as it comes from God.”

This, of course, could be applied in different ways. It doesn’t mean we may never earn money, but it has taught me that living in dependence on the Lord is of the greatest importance. And in my case, that has come in the way of giving up a secure income for a fundraised income. We now fundraise our salary, for the simple reason that there is no alternative funding for a non-profit organization that is not supported by government funds or the general public.

On the other side of the coin, I strongly believe that being a man not only means I provide for my family, but also gives me more responsibility to stand up for the pre-born as it is largely due to the demise of masculinity and the shirking of our responsibilities as men in society that abortion is so prevalent today. In general, we men have failed to be a role model to “our sons grown up in their youth” and we have failed to esteem “our daughters as cornerstones, polished after the similitude of a palace” (Psalm 144). From pornography to advertising in business windows we are bombarded with hyper-sexualized versions of women, now degraded to sex objects. Though I was conceived after the beginning of the sexual revolution, isn’t the question how we, as a Christian church, could have let this happen? Isn’t the question what our response is today—are we determined to make a difference, unwavering in guarding our homes and hearts? I know it is nearly impossible to protect our kids, let alone ourselves, and therefore it is more important than ever before to lead by example, to show boys how to be men and treat women and children with respect.

It is much too convenient for us to point to feminism as the sole cause of the sexual liberation of our day and age, when in part male chauvinism may have instigated the movement, the lukewarm state of the church allowed it, our materialism promoted it. And thus, abortion would not be the leading cause of death in Canada today, if men would take responsibility. No, not just the men who cowardly leave a woman to deal with the results of their physical desires and lusts, but you and me too—Christian men who ought to reflect Christ in all we think, say, and do.

While we may have failed in the past, and without God’s grace will continue to do so, this should not be a reason to give up on the future. Francis A. Schaeffer once wrote, “Future generations will look back, and many will either scoff or believe in Christ on the basis of whether we Christians of today took a sacrificial stand in our various walks of life on these overwhelmingly important issues.”

Isn’t that how we often look back at the lack of action from European Christians during the Second World War? Just the other day, someone said to me, “How could they have just let it happen?” I couldn’t help but think of the historical account of a Lutheran church, situated only a short distance from railroad tracks. Every Sunday, cattle cars full of Jews would ride past the church on their way to concentration or death camps. The wailing and weeping from the train could be heard in the church. What was the response? Comfortably inside, the congregation just sang louder to drown out the anguish. As we consider this, we shake our heads. “How could they?” But today, many of us, who call ourselves Christians, go about with our lives, “eating and drinking, marrying and giving in marriage” (Matthew 24:38), building our homes, and attending church, all the while fellow human beings are visiting hospitals and abortions clinics to have their tiny pre-born children torn to pieces. Should we not stop and rethink and change our lives accordingly, lest future generations will look at the blood on our hands and say, “How could they?”

Finally, regardless of talent or opportunities, the Scriptures command us in Matthew 22 to love the Lord with all our heart, soul, and mind, and our neighbour as ourselves. What does that means in our day-to-day lives? In obedience to God, that means asking what He would have us do about the injustice of our day, one that we pay for with our tax dollars. Proverbs 31: 8 says to “Open thy mouth for the dumb in the cause of all such as are appointed to destruction.” If you have watched “The Silent Scream” or take a few minutes to watch this video, you will be able to make the connection quite easily. Pre-born children are appointed to destruction, almost 300 times a day in our country alone. Each time an abortion is scheduled, we are to open our mouth to defend those that cannot defend themselves. That is not a question or a suggestion: it is a command.

There are many ways to advocate for the pre-born, the most vulnerable in our society in Canada today and for the past 25 years. Efforts are made through pro-life organizations such as ours to give a voice to the voiceless, to show their plight so that the general public may not plead ignorance and abortion will become unthinkable. Support comes in many forms, through actively volunteering, financially funding, prayerfully encouraging, and lovingly educating those that are still ignorant. But the most important question is this: are we willing? Are we willing to do whatever it takes to save these children?

For our little family, it has meant a life-style change and it won’t always be easy, but our decision has definitely come with tremendous blessings too. While working from home, we spend more time together than before, and we are able to raise our boys engaged in the fight for the very heart and life of our culture. We’ve also had the privilege of meeting many pro-lifers, each of them serving the Lord in the place that was given to them. A businessman wrote a big cheque after going through his finances and concluding that this cause was getting much too little. Young families with already tight budgets have committed to monthly donations to answer the call in this way. And one God-fearing, elderly couple we met wasn’t able to contribute much financially, but their prayers are a mighty weapon against the forces of darkness.

So, why give up so much to do pro-life work? The way I see it, we’re gaining more than we’re giving up. As the Talmud saying goes, “Whoever saves one life, saves the world entire.”