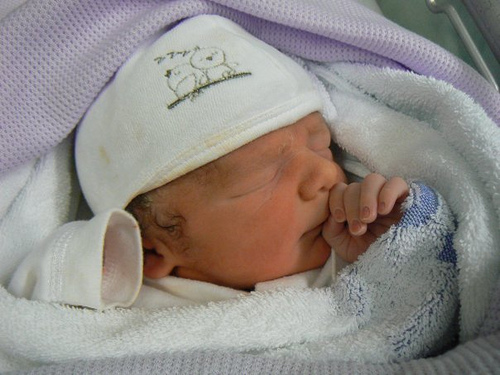 It is often said that pre-born life is hardly valued in our country and that many abort children with disabilities. I, for one, can relate to the heart-breaking situation of hearing that there is something wrong with your child, but I have never changed my mind about the injustice of abortion. This is my story.

After my husband and I were happily married for sometime we got pregnant and had a miscarriage three times. Our doctor referred us for further examinations, partly because there are genetic disorders amongst relatives. Blood was drawn and DNA testing was done. In the meantime, we were expecting for the fourth time—a blessing from above.

When the results came in after several weeks, we were deeply shocked. There was reason for serious concern. They said our baby would possible have no cerebrum, the largest part of the brain, and that the eyes were implanted the wrong way, due to a “mistake” between the 3rd and 7th chromosome. The verdict? With every pregnancy, there would be 30% chance of a miscarriage, 30% chance of a still-birth, and 40% chance of having a reasonably healthy child, though 5% of the latter could also be a severely handicapped child. As though life can be captured in percentages.

“You’re still young,” the physician said to us in a consoling but somewhat cold manner. “That makes all the difference, right?” My husband was 27; I was 22. All we knew was that One stood above it all. When our daughter was born there was double joy. She was completely healthy and well. I cannot even tell you how happy we were but everything was comprehended in a verse from Psalm 103: “Bless the LORD, O my soul, and forget not all his benefits.” What a miracle!

One year later, we experienced another miscarriage at 12 weeks of pregnancy, likely due to the same chromosomal disorder. To lose our sweet baby that we would have loved to hold and raise caused much sorrow. But—Homo proponit, sed Deus disponit. Man proposes, but God disposes.

Within the next two years, we received another daughter and a son. We were ever so happy with our little family. Some years later, I was pregnant again and we were delighted. At 20 weeks, we were expected to go for an ultrasound, which wasn’t routine for everyone back then. However, we needed to do this with every pregnancy due to the genetic predisposition for a handicapped child. It was an ultrasound I will never forget.

After a long, ominous silence, during which I intuitively felt that bad news was coming, the ultrasound technician took my hand and said, “Something is wrong with your child.” I remember that I began to cry, and that we were soon joined by my husband and the gynaecologist. But before anyone could say anything, I exclaimed through my tears, “But I will never, NEVER get rid of it!”

Since the medical staff immediately knew were we stood on this matter, no other “options” were offered and we were treated with utmost respect and cooperation. Almost every week there was another appointment and it became clear—our child was seriously handicapped. We didn’t know how long she would live, which caused much tension and insecurity. I had too much amniotic fluid and very much pain during the pregnancy, but the Lord helped me through it every single day. Our child grew according to the book.

Then, at 36 weeks, our Tirza was born. She passed away during her birth. Not because of her handicap, but because of placenta abruption.

Our dear daugther, our sweet child.

Despite her disability and the way her eyes were placed, Tirza was a beautiful baby. I dressed her myself—the few last things I could do for her. Only then I fully realized what it is to miss a child that you have also embraced. My husband and I held and caressed her, as did our parents and other children. We were allowed to take our dearly beloved daughter home prior to the funeral with family and close friends.

The Lord gave us to believe that Tirza is now eternally with Him—what a great comfort! It would almost be impossible to go through this otherwise, yet the Lord didn’t give us too much to carry. He saved my life, and took our child’s. He measured our shoulders before He put our cross on it.

Our gynaecologist interrupted his holiday to attend Tirza’s birth. Deeply moved, he remarked, “What a beautiful way to give closure to her life.” He explained that with an abortion, parents always have doubts and wonder whether their disabled child would have lived, what he or she would have looked like, and more. “But you have been able to give this a beautiful place in your life,” he said. And that is true. We even have pictures to sometimes look at, and precious memories forever in our hearts.

Despite miscarriages, we received two more healthy daugthers in the years that followed. The last one had to spend two weeks in an incubator at the NICU, and we were so afraid. But again, the Lord was good to us. “Blessed be the Lord, who daily loadeth us with benefits, even the God of our salvation. He that is our God is the God of salvation; and unto GOD the Lord belong the issues from death” (Psalm 68:19, 20).

Others often showed no understanding when we were expecting again, which was difficult. Yet we could and still may put our life in the Lord’s hands with a simple trust that He is in control. That brings true peace. As Job said, “Shall we receive good at the hand of God, and shall we not receive evil?” (Job 2:10). Our marriage form expresses this beautifully as well: “For this reason the Lord Jesus Christ…will aid and protect married persons even when they are least deserving it.”

We have experienced this often, especially when times were difficult. This was also the case with our very last pregnancy. Grateful for another child, we learned at 12 weeks that something was wrong. We thought we would carry the baby to full-term, but at 17 weeks her little heart stopped beating. After an induced birth, we buried her besides Tirza. Again, there was much sadness.

It is now one year later and this, in short, is my story. I speak from experience when I say to never, ever end your pregnancy! To dispose of your pre-born child is to touch God-given life—He reigns, not us. Regardless of how difficult it has been, I would have never wanted to abort my children. When people say they want the best for their child, my question is this: If someone is so dear to you, regardless of special needs, how can you abort him or her? Please know that I would take care of your child with all the love of my heart. I work with severely disabled adults who are unable to do anything for themselves and yet, they are able to give love. Because no one is ever created for no reason. And perhaps they are happier than those with the intelligence to reason everything.

All that matters is whether the Lord knows them, and knows you. You may have everything in this world, but without Him, you have nothing.

“Now abideth faith, hope, charity, these three; but the greatest of these is charity” (1 Corinthians 13:13).

The author of this article wishes to remain anonymous to the general public but is known to the editors of The Reformed Pro-Lifer. Together with her husband and five healthy children, she is a member of one of our Reformed congregations. Besides serving her family, she lovingly provides care for adults with severe developmental disabilities.

2 Replies to “A Mother’s Story: God’s Care through Life, Disability, and Death”