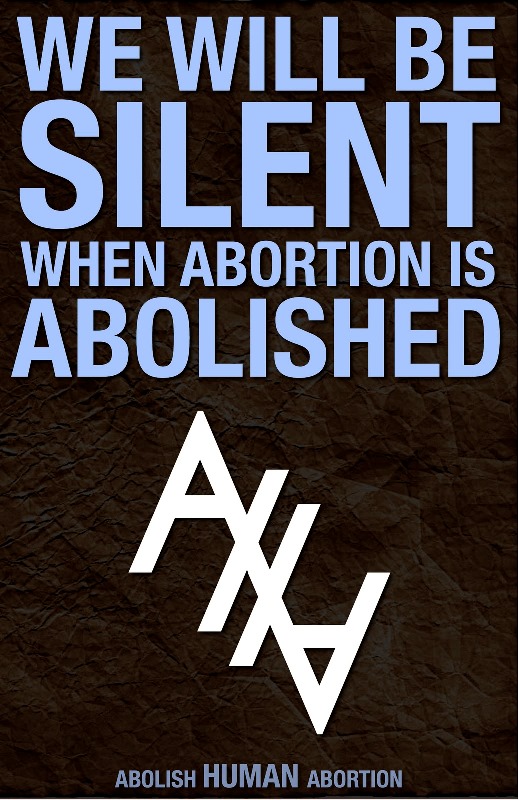 Editor’s Note: Many pro-lifers, especially conservative Protestants, have noticed the emergence on social media of a new organization referring to itself as “Abolish Human Abortion.” Many of us were initially enthusiastic about the quality and conciseness of the message they put out. However, AHA has shown itself to be intentionally insulting, misguided, and wilfully divisive. As such, we are publishing an article by an American pro-life advocate explaining just a few of the many problems with their “ideology.”

I wish I didn’t have to write this article, but the reality is I believe that AHA does more harm to the pro-life movement than good. I do want to start off by saying that I appreciate their passion to see abortion done away with and unborn children saved. I believe that much of their views come out of a frustration with abortion having become legalized and remaining so for 40-plus years in the first place, which was due in large part to Christians not taking a stand against this horrible practice, a frustration which I share. However, they are far too divisive (and many of their views are simply skewed and not well-reasoned). What the pro-life movement needs now, more than ever, is unity among its supporters and proponents, even ones who disagree with us on spiritual issues. You can find another such article here. I have decided to add my voice to the fray. I would just like to ask that you hear my heart on this, and not just my words. I am not saying that pro-life Christians should leave the Gospel out of all their conversations; I am merely arguing that it is not necessary to make the pro-life case.

Specifically, I’ll be addressing their article “The Difference between Pro-Lifers and Abolitionists,” which you can find here.

Their first section has the heading “‘Abolitionist’ is not a synonym for ‘pro-lifer.'” That’s a pretty obvious statement. There is nothing in the term “abolitionist” that specifically indicates the abortion issue. William Wilberforce was a slavery abolitionist. Martin Luther King, Jr. was a racial discrimination abolitionist. So my response here is “of course not.” The problem is that they are making here a distinction without a difference. There is no difference between “abortion abolitionist” and “pro-life advocate,” as will be made clear in the rest of this article.

AHA makes the claim that pro-life is the expression of a moral opinion, abolitionist is the expression of a moral action. This statement is very problematic, especially coming from a group that considers themselves Christian. Christians believe in objective morality. Thoughtful Christians don’t deny that Atheists can live moral lives and recognize moral truths. Pro-life is not a moral opinion, but an expression of the moral reality that one ought to not intentionally kill an innocent human being without strong moral justification. Of course, one can be pro-life and not seek to do anything about it, but then their stance becomes meaningless. You can make the case that one becomes an abolitionist when one seeks to put your pro-life views into action (but that’s also the definition of “pro-life advocate”). Even if this is your stance, then nothing about this stance indicates that the non-religious or members of another religion can’t also be abolitionists.

Their next heading states: “Pro-lifers prefer gradual, over immediate, abolition.” This is simply a straw man argument of what many pro-life people believe (a straw man argument is when you attack a similar argument to the one presented that is weaker and easier to defeat). Pro-life advocates actually do prefer immediate abolition. We would love it if our government would stop sanctioning the killing of unborn children, and if Planned Parenthood would stop doing it. What pro-life people realize, and which is supported by history, is that it simply doesn’t work out that way. Gradually is the way to enact a change like this. It took William Wilberforce twenty years to abolish the slave trade in England. He made it his life’s mission to see this done. He worked incrementally; voting for legislation that kept slavery legal yet made conditions safer for slaves. He knew that the way his culture was, he couldn’t pass all or nothing laws. He worked to change the culture’s perception of slavery while working to pass incrementally better legislation until he was finally able to abolish it altogether. It sucks, but that’s the way it’s going to have to get done. Pro-life advocates don’t prefer this, but we’re also willing to work strategically to save as many lives as we possibly can in the meantime. So by AHA’s own definition, William Wilberforce was not an abolitionist.

They make the claim that abolitionism has historically been wed to the doctrine of immediatism, but they offer no supporting evidence for this claim. I’d be interested to know at what point in history a societal evil was recognized, decided that it needed to be done away with, and then made illegal immediately without having to resort to incremental steps.

Their next heading states, “You can be a secular pro-lifer. You can’t be a secular abolitionist.” Really? Says who? Why should we accept your definition of abolitionist? Are you saying there were no secular people who helped abolish slavery or racial discrimination? They are making an ad hoc argument, using their own made-up definition of abolitionist. There is nothing inherent in the word “abolitionist” that one must believe in a higher law or deity. And again, their statements are distressing because one does not need to be a Christian to recognize an objective moral law (just look at the numerous secular ethicists who, almost across the board, reject moral relativism). In fact, the dictionary definition of “abolitionist” is: “a person who advocated or supported the abolition of slavery in the U.S.,” “a person who advocates the abolition of any law or practice deemed harmful to society.”

Their final heading states, “Pro-lifers prefer common ground. Abolitionists prefer to proclaim the gospel.” Another straw man argument. I wonder what AHA would say of someone like me, a conservative Protestant Christian who seeks to abolish abortion in the United States, but also believes these things (like finding common ground and that incrementalism is the wisest maneuver) that apparently true abolitionists don’t look for (and by the way, some of the greatest opponents of abortion has always been the Catholic church, whom AHA would probably write off as not being true abolitionists since they’re “not true Christians”). Anyway, it’s a straw man because a Christian like me seeks to find common ground as a springboard to a good discussion, whereas I am also not afraid of sharing the Gospel with people I talk to. Many of my conversations naturally lead in to where morality comes from and whether or not God exists. But in my conversations on abortion, this is not my main focus. Christianity has a long, proud history of using natural, non-theological arguments to make their case. That’s because if the Christian worldview is true, it is true for all of reality. Abortion would be immoral whether or not you could support that argument Biblically (but more on this in a future article).

I would like AHA to come to one of our Justice for All seminars. We use methods that Greg Koukl talks about in his book Tactics in order to help make our case, to help people see that our views are rational and can be supported through reason and evidence. I am a mentor and speaker for JFA, and we teach good conversation techniques, like listening to understand the person’s viewpoint (rather than simply assuming it), asking questions for clarification and to see why they believe what they believe, and, yes, to find common ground as a way of keeping the conversation going (because believe it or not, we can find common ground with pro-choice people.

This attitude that Atheists can’t be true abolitionists is even more bizarre, considering that on a post in their blog called Atheist Ethics Are Impossible, they state the following to pro-life Atheists: “I admire your desire to abolish the practice of human abortion. I believe your fight against this abominable practice is praiseworthy. I think you are right in believing this practice is a great atrocity and violation of civil rights…” So…what? An Atheist can want and actively work to abolish abortion but can’t be an abolitionist? You believe their fight is praiseworthy and you repay them by saying “you’re not one of us”

I’m not saying that we can’t disagree with Atheists, or that we should act like we agree with them on everything. I have these discussions with my colleagues in SPL (as long as they’re willing — I don’t force it on them). We can work with people we disagree with on other issues against a common enemy, namely legalized abortion.

AHA has this grand idea that they’re “engaging the culture” by refusing to use secular arguments alone, refusing to make arguments apart from the gospel of Jesus Christ. While I commend their passion to see souls saved, this actually presents a complete ignorance of their culture. People are not going to be convinced by Biblical arguments (in fact, arguing that God exists because the Bible says so is a logical fallacy, circular reasoning — you need to have secular arguments as to how you know God exists in the first place). You can have a spiritual discussion, all the while leaving the arguments against abortion behind. If you make the argument that abortion is wrong because God has made us in his image and he says that murder is wrong, that’s true, of course. But it’s not going to be convincing to atheists. And by the sheer number of religious pro-choice people, converting them to Christianity doesn’t guarantee a convert to the pro-life position. If you’re going to use religious arguments, you’re going to have to prove that your religion is the true one. While that’s certainly do-able, it’s an unnecessary step in changing peoples’ minds on abortion. I appreciate you if that’s how you feel it is best done, I do it myself. But claiming that Atheistic pro-life advocates (or other pro-life advocates) can’t make pro-life converts apart from the gospel is just plain incorrect. I’ve convinced people to become pro-life by simply presenting them with the scientific evidence of human development.

So again, my purpose here is not to belittle a group of pro-life advocates, and I hope that they prayerfully consider my words. I welcome further discussion, and if someone from AHA would like to respond I would be more than happy to continue the dialogue. One need not constantly bring up the gospel in order to convince someone to be pro-life, especially if that person is hostile to the gospel but open to hearing arguments for the pro-life position. You have to tailor your arguments to your audience.

18 Replies to “A Fundamental Flaw with “Abolish Human Abortion””