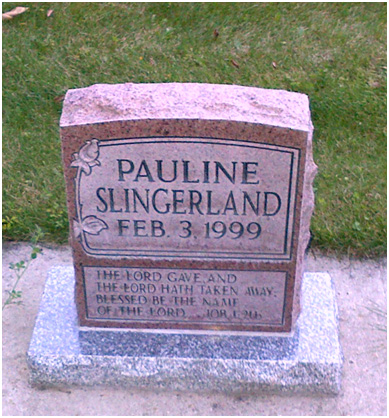 Having worked with the Canadian Centre for Bio-Ethical Reform for a year now and being confronted with the issue of abortion on a daily basis, I was fully aware of the gravity of the situation here in Canada.  However, it was not until a few weeks ago that I realized that the current status quo has serious personal implications for my family.

In my growing up years, abortion was an issue we never spoke about, and certainly never worried about.  After all, we weren’t having abortions so the status quo didn’t affect us at all.  Quite the contrary, my parents have been blessed with 16 children, two of whom we were grieved to lose at very young ages.

Pauline was full term or 40 weeks gestational age when she was stillborn on February 3, 1999 and on September 8, 2003, Rebecca passed away in her sleep at the age of 11 months and 21 days.  Both were dearly loved, mourned, and they are missed even today.

A few weeks ago was the ninth anniversary of Rebecca’s death.  As is our custom, we commemorated the occasion with a family trip to the cemetery where we visited both Rebecca and Pauline’s final resting spots.  Their graves lie just a row apart from each other in the Baby Land section of the cemetery and they have matching gravestones.  By all appearances, there is not much difference between the two except for the names and the dates inscribed onto the stones.

However, there is a distinct difference between the two.  You see, according to the laws in Canada, my sister Pauline is not classified as a person.  Section 223 of the Criminal Code of Canada states that a child becomes a human being within the meaning of this Act when it has completely proceeded, in a living state from the body of its mother whether or not it has breathed, it has an independent circulation, or the navel string is severed.”  My sister never had the opportunity to “become a human being” because she died prior to her birth.

The morning of her birth, when Mom and Dad returned home from the hospital, rather than the excitement of a new baby, they had empty arms and the duty of selecting a coffin and arranging a funeral.  This is never something that a parent expects, but even worse for my parents was the realization that their precious daughter is completely disregarded as a member of the human family by her own country.

While it infuriates me that this is the case, it also confuses me.  What made the difference between Rebecca and Pauline?  Was it size?  Rebecca was only a little bit bigger than Pauline upon each of their deaths and that’s only because she had an additional year to gain that extra weight and size.

That extra year also contributed to the fact that Rebecca was more developed than Pauline.  Rebecca was learning to pull herself to a standing position, as is appropriate for a little girl that age and Pauline was also doing age appropriate things such as sucking her thumb, kicking, and moving.

They were in very different environments upon their deaths, as Pauline was still within the [safety] of my mother’s womb, and Rebecca was in her crib.   This difference again, only a difference based on age.

They both relied on my mother for their basic needs such as nourishment and shelter, Pauline from within my mother’s womb, and Rebecca from without.  Because of her age, Rebecca’s degree of dependency on my mother for survival was decreasing.

It is completely ridiculous that such a distinction is made because of such minor differences.  In fact, in our society, these differences can often mean life or death for the youngest members of the human race.  This is age discrimination of the worst kind, and this is why I will continue to fight for personhood rights for all human beings.

One Reply to “My Little Sister Was A Person, Too”