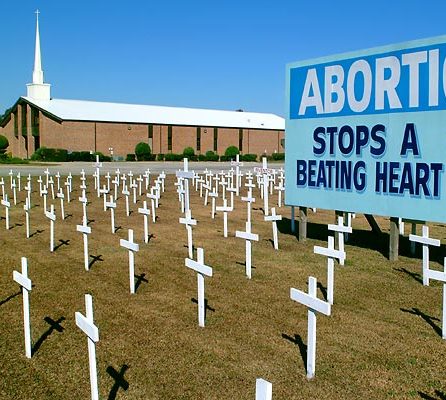 Well, yes. And also, no. Let me explain.

First of all, the example we would usually give is that of a firefighter. A firefighter wouldn’t cease in his task of saving lives, of pulling endangered human beings from a burning building, to talk about God with people inside the burning building. The immediacy of the circumstances demands that he work first to rescue those being “drawn unto death.” However, we would point out that a firefighter honors God by fighting against imminent and dire circumstances to preserve God’s gift of life. The firefighter’s actions illustrate the underlying truth behind them: That life is precious. Parallel examples (resistance workers pulling Jews off death camp trains, humanitarian workers hiding fleeing refugees from genocidal forces) could also be used to illustrate this point. Just as the actions of these human rights defenders honor God by fighting for those created in His image, so too does the actions of those seeking to defend the lives of those in imminent danger of abortion.

I would argue that to a large degree, the whole pro-life position presupposes the existence of God. After all, why is it wrong to kill human beings? It’s wrong because human beings are valuable. And why are they valuable? Because they are made in the image of God. He Who gave them life is the only One with the right to take it. Abortion, like the intentional destruction of any human life, not only violates human rights but also violates the sovereignty of God.

There is another point to be made here, one made by pro-life apologist Scott Klusendorf: I would categorically reject the premise that there is God’s truth, then, man’s truth. Truth is truth, and if reasonable arguments can be made for the pro-life view, those are God’s reasons.” Thus, to try to draw a differentiation between using explicitly Christian arguments versus, say, an appeal to the pre-born child’s humanity and the inhumanity of abortion, is simply a false dichotomy.

Unfortunately, bringing God into the discussion at universities and (especially) secular high schools, especially in the context of street-level outreach, generally causes you to lose the discussion (and by that I mean, lose the attention and the growing interest of the students approaching us.) It would seem logical to assume that those who have been undervalued, devalued or abused would be open to hearing about Who gave them value. Unfortunately, in our culture today, the reverse is often the case.

(I would note, as an aside, that this is not by any means new. In spite of William Wilberforce’s moral appeals in his anti-Slave Trade speeches to Parliament, the abolitionists generally avoided infusing their official case with biblical rationale. In his seminal work on the abolitionists, Bury the Chains, historian Adam Hochschild notes that such rationale is remarkably absent from abolitionist Thomas Clarkson’s enormous expose of the Slave Trade: “What also makes the Abstract feel surprisingly contemporary is what it does not contain. At a time in history when a large portion of all books and pamphlets were theological tracts and sermons, and in a book that quoted several clergymen as witnesses, the Abstract had no references to the Bible. Clarkson and his comrades somehow sensed that they could better evoke sympathy if they stood back and let the evidence speak for itself, supported by the damning quotations from West Indian laws and newspapers.” Human beings can still generally recognize barbarism when they see it, even if they are hostile to the moral truths that define it as such.)

In a hurting culture, starting with the Big Truth while trying to impart one of the small truths is often counter-productive. Talking to someone who has been abused (emotionally, physically, or sexually) and explaining to them that they were created in the image of an all-powerful God will often result in a simple, hard to debate response: “Well, where was He was all of this was happening to me?”

The question of evil and why God permits it is always the most difficult apologetic question to answer–not in the purely logical, rational sense (that’s pretty easy, especially in the university setting) but in the sense that you’re combating people’s feelings and emotions rather than an objective question such as “Can a God Who is Love permit evil things to happen?”

In conversations with our culture, it’s often about taking baby steps. We’re trying to impart the idea that they as humans have value, in order to build a bridge to the realization that all humans have value. In many street-level debates, not all passersby go the desirable, “I was pro-choice, you talked to me, now I’m pro-life” route –often, we have to lay a foundation. Bringing up the Divine is the opposite of baby steps–suddenly, instead of feeding them ideas in little, bite-sized chunks, we’re trying to ram an entire belief system down their throat. In a culture that does not know God, even the mention of His Name brings up a million questions. Who is God? Which religion is right about Him? Does He love me? Why did He allow these things to happen to me? What does His existence imply for my life and how I live it? Keep in mind—we’re trying to protect innocent children from imminent death, and thus often do not have a lot of time to convince someone not to kill their child. No one has ever suggested that those hiding humans fleeing genocide should have first attempted to convert them to Christianity before taking them under protection and into hiding—the imminent danger of the situation demands immediate action. The Good Samaritan did not first take the wounded man to church or the synagogue, but to get healed from his wounds.

Having an internally consistent Christian worldview often makes it extremely difficult when talking to a borderline illiterate, over-sexed, visually driven culture, as you’re constantly wanting to show people the results of their own beliefs, or logical extensions (presuppositions or inevitable conclusions) of those beliefs. Unfortunately, in order to fully engage with our specific mission–which is to turn a culture against abortion and solidify the growing belief that it violates human rights–we have to have a laser-focus. Those who fight for everything often end up fighting nothing. We can’t take on the entire forces of Darkness, even though we can rob Satan of many of his victims. And we do. Every day.

That being said, I firmly believe that turning someone pro-life is often the first step towards introducing them to greater Truth. We see time and time again that in order for today’s culture to recognize that Truth exists at all; they have to be convinced of some part of it. They often begin to ask what else is true, what else they have accepted that may be a lie. We see often that for people to remember they have a conscience, it needs to be pricked, awakened. Our projects, which graphically expose the reality of abortion, unequivocally do that. Much of our opposition is the startled cries of pain of consciences that have not seen the light in far too long (and don’t our eyes always hurt when the light is suddenly switched on?) We are the first point of contact in a heavily secularized culture to introduce these young people to inherently Christian concepts that are totally foreign to them–concepts like self-sacrifice, forgiveness, human dignity, human value, truth, and right and wrong. We are directly undermining the suicidal but prevalent concept of moral relativism every day. In our specific role as anti-abortion activists, we might not be able to take down the whole rotting house. But we can take a jackhammer to the foundation.

The pro-life movement is but one segment of a broader Culture of Life that is at war with a broader, secularized Culture of Death. We have been tasked with defending one small part of a much greater Truth. The first point of contact doesn’t win the war or even the battle, but it does establish a bridgehead. Concepts such as those I mentioned above are, I think, a bridgehead in a culture that is rejecting so much of what is right and beautiful. Often in discussion people go from “abortion is wrong” to “I should not have sex before marriage” without us even bringing it up–the premises we are teaching them lead to other, almost inevitable conclusions. The newest generation of young people has experienced the full brunt of the fallout of the Sexual Revolution, from broken families, the disappearance of true, self-sacrificing love, a quarter of their generation butchered by abortion, rampant STD’s, and a nihilistic lack of truth. We as anti-abortion activists are trying to help them reject a large part of that legacy.

Others, we hope, will help us with the rest.”